You are here: Home > Bangladesh vs India Asia Cup 2012: Statistics 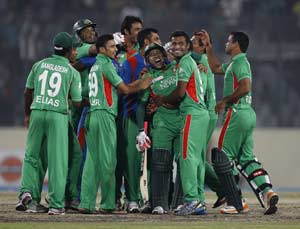 # Bangladesh have recorded their first win over India at the Asia Cup.  They had lost the first eight games to India in the Asia Cup between October 27, 1988 and June 16, 2010.

# Bangladesh’s five-wicket triumph is their first against a Test-playing nation in the Asia Cup – their third overall – the first two being by 116 runs against Hong Kong at Colombo, SSC on July 16, 2004 and by 96 runs against UAE at Lahore on June 24, 2008

# Bangladesh’s aforesaid total is their highest against a Test-playing nation in the Asia Cup – their second highest overall, next only to the 300 for eight against UAE at Lahore on June 24, 2008.

# Bangladesh’s 293 for five is their second highest successful chase in ODIs – the highest is 313 for six against Zimbabwe at Bulawayo on August 16, 2009.

# Sachin Tendulkar has created history with his 100th international hundred – his first against Bangladesh in ODIs.

# With his aforesaid hundred, Sachin has completed his set of hundreds against every full member country in both Tests and ODIs.

# Tendulkar has aggregated 496 in twelve matches against Bangladesh in ODIs.  His tally one century and two
fifties.

# Tendulkar’s previous highest against Bangladesh in ODIs was 82 not out at Colombo, SSC on July 21, 2004.

# Tendulkar has recorded 53 international hdundreds in a winning cause – a tally bettered only by Ricky Ponting (55).

# Tendulkar’s 114 is his 25th international hundred in a losing cause – the most by a batsman.

# Gautam Gambhir has extended his Indian record for the highest runs’ tally against Bangladesh in ODIs – 592 runs at an average of 59.20 in eleven games, including two hundreds and three fifties.

# Sachin Tendulkar and Virat Kohli put on 148 for the second wicket – India’s second highest against Bangladesh in ODIs, next only to the 154 between Tendulkar and Sourav Ganguly at Colombo, SSC on July 21, 2004.

# The aforesaid partnership is the fourth highest for India at the Asia Cup – the highest being 205 between Gambhir and Kohli against Sri Lanka at Dhaka on March 13, 2002.

# Virat Kohli (66 off 82 balls) has recorded his second fifty against Bangladesh – his 21st in ODIs.

# Kohli is averaging 123.33 in five ODIs against Bangladesh – 370 runs, including two hundreds and two fifties.

# Suresh Raina (51) has posted his 21st fifty in ODIs – his second against Bangladesh.

# Tamim Iqbal has recorded 21 fifties in ODIs – four in the Asia Cup.

# Jahurul Islam (53) has posted his maiden fifty in ODIs, surpassing the 41 against Netherlands at Glasgow on July 20, 2010.

# Jahurul and Tamim were involved in a stand of 113 for the second wicket – Bangladesh’s highest for any wicket against India in ODIs, surpassing the 112 for the sixth wicket between Alok Kapali and Mahmudullah at Karachi on June 28, 2008.  Both these partnerships have been recorded in the Asia Cup.

# Shakib has received his first Man of the Match award against India – his 12th in ODIs.